Today I am 40 years old and in better shape than I have ever been.  The last 4 years have been dedicated to my return to martial arts after an 8 year hiatus.  In 2009 I was in pain, depressed and out of shape.  I was in an accident that caused me great pain in the lower back.  My job requires a great deal of sitting, which I could not do for long periods of time making my work difficult and contributed to a lot of stress and anxiety about my ability to perform my duties.  All of this made day to day living a misery.  Exercise that I was used to such as biking and running were hard to do.

In July of 2009, I started to fight back.  I learned about high-intensity interval training as a way to have a good well rounded workout.  Over the course of a year I developed a few circuits that I used to re-build my body and prepare it for a return to a normal work/life with the hope of eventually returning to martial arts.  I celebrated my 40th birthday this morning with the following workout:

Email ThisBlogThis!Share to TwitterShare to FacebookShare to Pinterest
Labels: Training 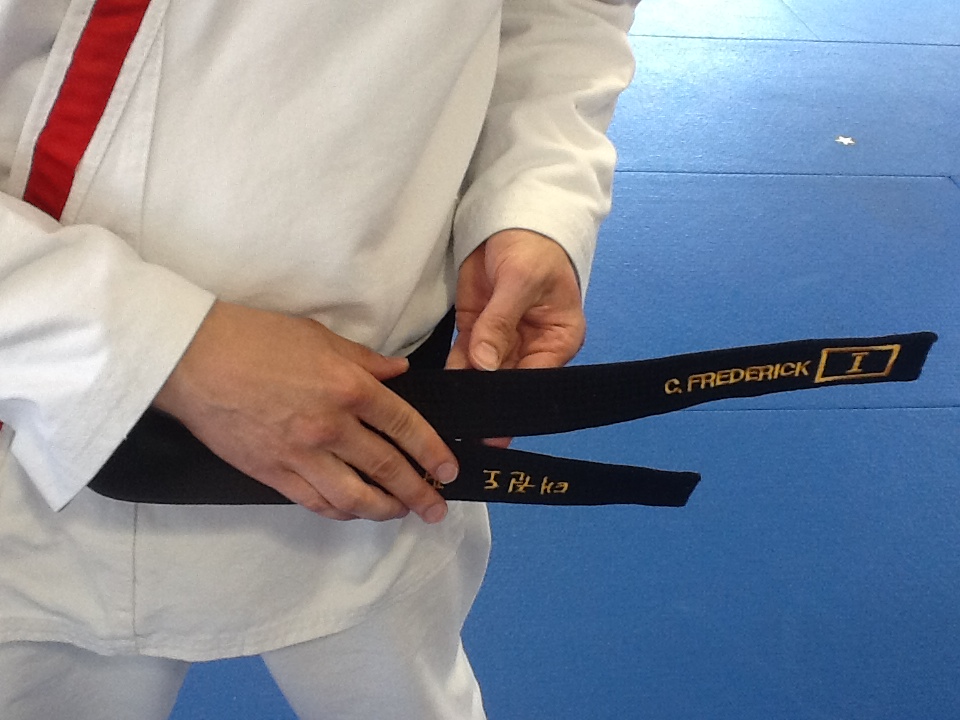 Two years ago I set a goal for myself.  That I would earn my Black Belt before I turned 40 years old.  I had hoped to attain that rank many years ago, but I met some obstacles along the way.

I began my training in North Carolina in 1984 under the instruction of Mr. Bill Osterholt and his wife Diane Osterholt (See blog post "Origins")  I stopped my training at the brown belt level and we moved up north to Pennsylvania shortly afterward.

I started training again in college (1992), but stopped when I switched schools.  I was a brown belt.  College was tough and I didn't take care of myself, gained a lot of weight and didn't consider training again for many years later.  I wanted to get back into it, but I felt I needed to get back in shape first, so I spent about a year doing a lot of hard running (4+ miles per day) and dropped 40 pounds.  I had some health problems shortly after this and I didn't think about training again until several years later.

In 2004, I started training again at a local ATA taekwondo school and worked hard to quickly attain again the rank of Brown Belt.  I took a break after the birth of my son, but then had a string of injuries, a car wreck and subsequent health problems.  I was in a lot of pain and day to day life was very difficult and the thought of training again seemed impossible.  I thought I would be stuck as a Brown Belt forever!  With the strength and encouragement of my wife to support me, I exercised hard for 3 years, re-built my body, and worked on balance and flexibility.

In 2011, I called the ATA school and talked with the head instructors about returning to train with them.  They were very kind and allowed me to continue my Black Belt contract 8 years after leaving the studio.  I was there for about a month and hurt my knee pretty bad.  I had to stop training for another year while that healed.

In 2012, I returned again, trained hard, endured another string of injuries, and became very involved in the instructor group at the school.  I tested for Black Belt last Saturday and passed.

I carry very high expectations for myself and generally fall short of them.  This day was exceptional.  I performed well and afterwards I was proud of the achievement.

This milestone achievement could not have been accomplished were it not for the support and encouragement of the school, the head instructor and owner, and most importantly my family, who has struggled with me though the whole process.  Below are some highlights from the test: 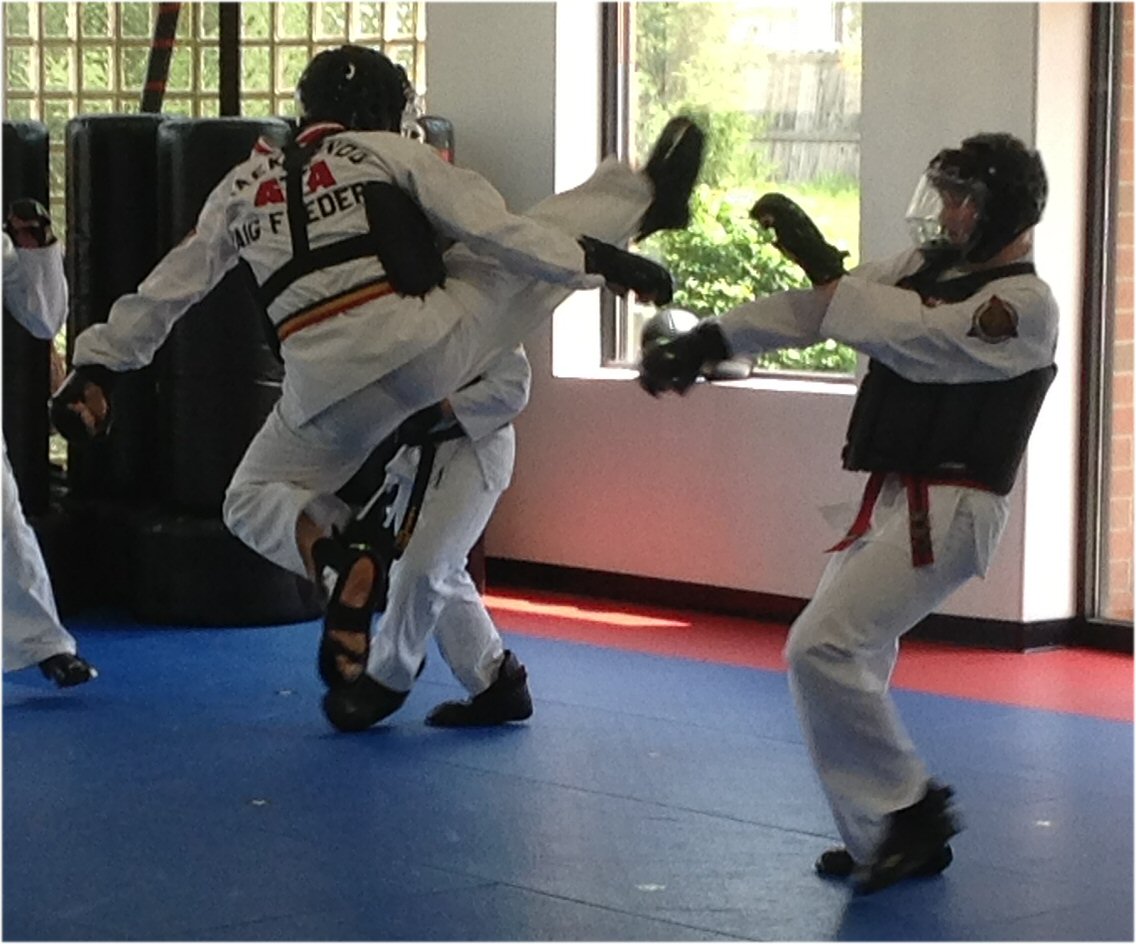 Email ThisBlogThis!Share to TwitterShare to FacebookShare to Pinterest
Labels: General

As part of our workout this Saturday, I led the class in some static active stretching exercises.  I like to do these stretches because they help develop the strength and balance needed to deliver solid, controlled kicks. This day's exercises consisted executing front kicks and round kicks in the following progression:


This type of exercise helps develop superior strength in the legs, hips and foot.  This will make both sparring and forms training easier in the long run because students will have the strength to hold themselves strong in every component of a kick technique.
Posted by LoneWolf at 8:12 AM No comments:

Joints hold the body together and if our students have been sitting at their desks all day and commuting to work, their joints are probably very tight and stiff.  Before tossing limbs about, it is essential to warm up the major joints that will be employed during the workout.  I have used the following progression recently:
Posted by LoneWolf at 7:01 PM No comments:

I wanted to share how I structure a class at my school.  I have been teaching Taekwondo for about a year now and have settled on some simple plans for a good adult martial arts class.  When I started, I did not want to simply emulate what I had been taught, but rather improve upon it by sharing what I know and understand through my own personal training.  The basic class structure is as follows:


This structure above is designed to take the adult body, which is probably stiff as wood when it enters the dojahng and prepares it for its best possible performance for the "Practical Curriculum" section of the class.  Traditional martial arts warm-ups start with items #1 and immediately follow to #5.  This doesn't work for me and from what I have learned through research, it doesn't work for most people and could lead to injury if care is not taken.  The body is much more elastic after a workout and focus on stretching to enhance flexibility should be done at the END of class, not the beginning.

Posted by LoneWolf at 7:00 PM No comments:

Email ThisBlogThis!Share to TwitterShare to FacebookShare to Pinterest
Labels: Instruction

This Saturday I focused on sparring for adults and focused on techniques that may work for those with limited flexibility.  In sparring, we want to try and not expose our center-line to our opponent to avoid becoming an easy mark for them.  #2 kicks and reverse hand techniques should be used with great care.  Today I focused on making use of front kicks in sparring.  In general, it makes sense to use techniques with the hands and feet you have closest to your targets.

When I started at ATA many years ago, I was instructed not to use front kicks in sparring because of center-line exposure.  This is true if we are talking about a back-leg #2 kick.  However, if we make use of a #1 front kick with limited center-line exposure, we may discover a alternative tool for adults that have limited lateral flexibility to reach head-high for round kicks, hook kicks, or side kicks.  Some key targets that are good for front kicks are:


I found that the during the exercise, the students had started to gravitate toward a more exposed posture to deliver the kick more easily.  I then highlighted how to quickly turn the hips toward the target, kick, and then retreat.  Following this, I had them try an inner-crescent kick and then use that momentum inward to help them retreat into a defensive posture away from their opponent.

I was taught long ago that hand techniques score points and that you must use combinations.  Kicks in my mind are a means to an end and you are lucky if you can score with the kick.  To score with hand techniques, you have to have fast hands.  To deliver fast hand techniques, you have to understand the bio-mechanics of your body's weapons.  To deliver a fast hand technique, such as a backfist, you must remain relaxed until ready to strike and rely on twitch muscle fibers to help you accelerate the hand to its target.  To illustrate, I broke down the back fist into its sub-components.  The mechanics of a backfist from a resting position are as follows:
Executing steps 2 and 3 must be done as quickly as possible and rely heavily on the twitch muscle fibers for speed.  Today, we practiced the above using kick pad targets (pork-chop pads).  Because ATA forbids throwing hand techniques to the head, backfists are only useful as a fore-hand technique when you and your opponent stand in an open stance against each other (i.e. your belt knots are pointing in the same direction).  Aim for the upper or lower torso for scoring.

The second drill I covered was the fore-hand hook punch.  The mechanics are similar to that of the backfist but differ in the striking direction:


This technique is best used when you and your opponent are in a closed stance against each other (i.e. belt knots are pointing in opposite directions)
Posted by LoneWolf at 6:59 PM No comments:

Email ThisBlogThis!Share to TwitterShare to FacebookShare to Pinterest
Labels: Instruction

The road to black belt has been a long one.  It began in 1984 in a small karate studio in North Carolina where I trained for 4 years under the instruction of Senseis Bill & Dianne Osterholt.  I was never very good at sports, nor was I very interested in them, but I found karate fascinating.   My instructors' movements were crisp, precise, fast, and powerful.  I wanted very much to emulate their abilities and still strive to achieve their level of proficiency.

My instructors were tough, but fair.  They had very high standards for technique and I worked very hard to attain the level of proficiency they required.  I have studied in other schools and systems on and off throughout my martial arts career (including ATA), but I still hold myself to their standards when I evaluate my own performance.  I regret not having the opportunity to continue my training under their instruction, but I hope to pass on what I have learned to others.
Posted by LoneWolf at 3:37 PM 1 comment: